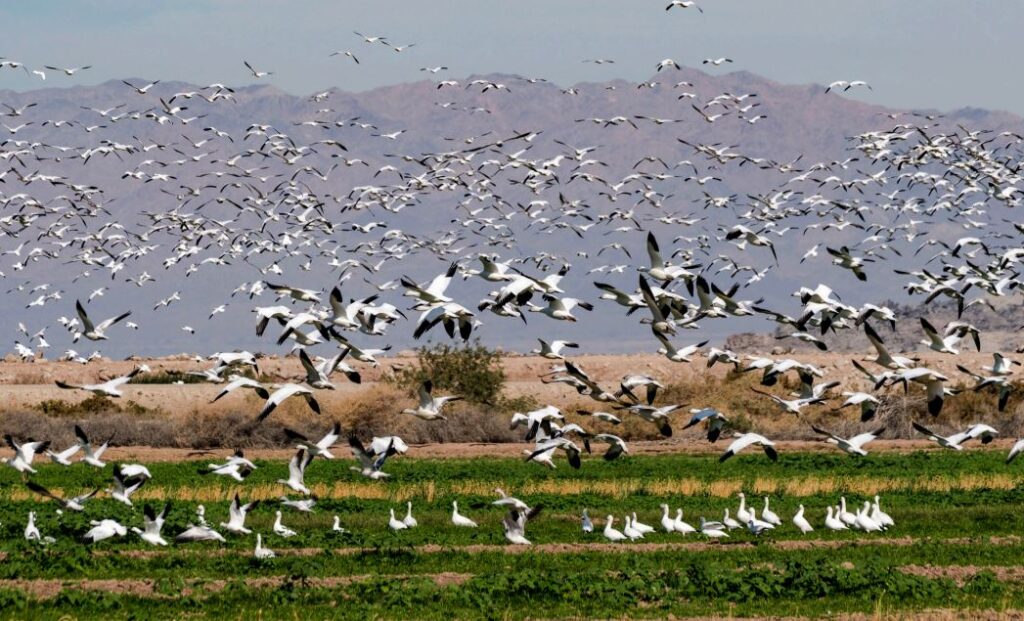 Aided by input from community members, local leaders and interested groups, California state agencies are focused on implementing projects as part of the Salton Sea Management Program’s 10-year plan. The plan calls for construction of habitat restoration and dust suppression on 30,000 acres of exposed lakebed and areas that will be exposed by 2028.

The Species Conservation Habitat (SCH) Project is the state’s first large-scale project to reduce exposed lakebed and create environmental habitat. Following initial onsite work in 2020, the state’s design-build contractors, Kiewit Infrastructure West Co., began construction in 2021 on the $206.5 million project located at the southern end of the Salton Sea on both sides of the New River. 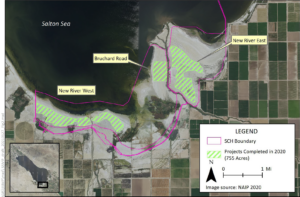 Projects completed at the Salton Sea in 2020.

The SCH, enabled by land access and water use agreements with the Imperial Irrigation District, will create a network of ponds with islands and areas of varying water depths to provide important fish and bird habitat and suppress dust emissions to improve regional air quality as the Salton Sea recedes.

It is anticipated that the project will create as many as 3,000 jobs over the course of construction.
In addition to launching the SCH, the SSMP team completed approximately 755 acres of temporary dust suppression projects at the southern end of the Salton Sea in 2020 as an interim proactive measure to treat areas of exposed lakebed due to dropping water levels. 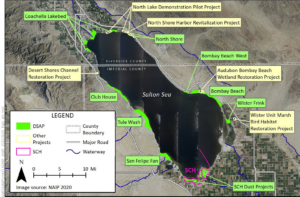 Projects in progress and potential future projects under consideration at the Salton Sea.

The SSMP team shared its near-term plans for interim projects to help control dust with the release of the Dust Suppression Action Plan in July 2020. The plan is a guidance document that outlines 9,800 acres of project planning areas on exposed lakebed around the Salton Sea, identifies potential dust suppression concepts, and describes the steps needed to transition from concept to on-the-ground implementation over the next few years.

Since the state is not a significant landowner around the Salton Sea, collaboration with various land-owning entities is critical to the SSMP team’s ability to implement projects. Land-access agreements and permits must be secured before soil testing or construction work begins. As a result, the SSMP is prioritizing work to secure land access in areas with the highest emissivity potential. These projects will help control dust and limit Sea-related impacts on air quality for communities such as Salton City, Bombay Beach and North Shore. Projects are in the planning stage at six sites for which land access is expected shortly: Clubhouse, Tule Wash, San Felipe Fan, Bombay Beach and Bombay Beach West, and North Shore. 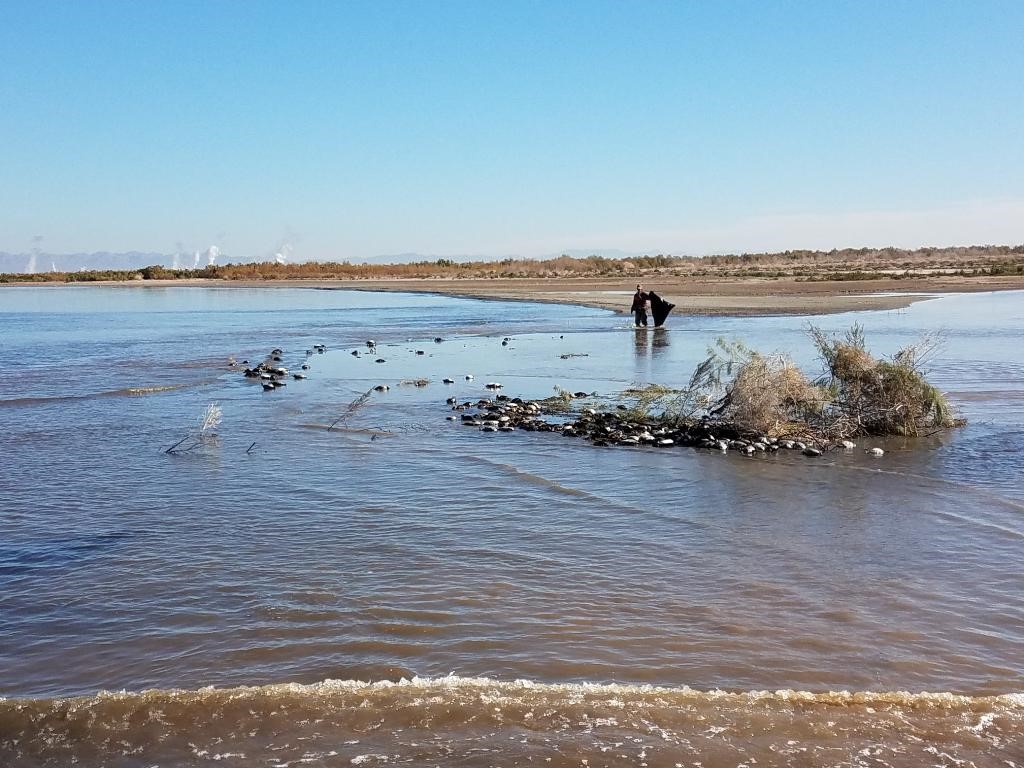 Implementation of the approximately 4,110-acre Species Conservation Habitat (SCH) Project is moving forward at full steam. It is located along the New River at the southern end of the Salton Sea and aims to reduce exposed lakebed and create environmental habitat.

Following initial onsite work in late fall, the state’s design-build contractors, Kiewit Infrastructure West Co., began construction in January 2021 on the $206.5 million project located at the southern end of the Sea on both sides of the New River.

With site access secured in 2019 and initial work completed in 2020, construction began in January 2021. The project will cover approximately 4,110 acres, an increase over the previously estimated 3,770 acres due to an updated design. Construction is expected to continue through the end of 2023. The SCH Project is anticipated to create as many as 3,000 jobs over the course of construction.

The state team is focused on implementing near-term dust control projects and has developed a Dust Suppression Action Plan (DSAP) to prioritize and identify approximately 9,800 acres of planning areas for dust suppression projects on emissive lakebed at locations around the Salton Sea. About 755 acres of temporary dust suppression projects were completed in 2020. These acres are a first step with further plans to include water and develop habitat for fish and birds.

The Bruchard Road Dust Suppression Project was the first projected completed. The 112-acre project, located near the mouth of the New River, was designed to reduce fugitive dust emission from areas of lakebed that have been exposed due to dropping lake levels. The project also served to develop a streamlined permitting approach that can be implemented at other sites to expedite projects around the Salton Sea. Two other dust suppression projects were completed in 2020. The 306-acre New River East Project and the 280-acre New River West Project complete the three temporary surface roughening projects. All are located within the footprint of the Species Conservation Habitat (SCH) Project and will be inundated with water upon completion of the SCH project.

The project concept in the Dust Suppression Action Plan included Phase A projects that comprise waterless techniques to suppress dust to be implemented first, and Phase B projects that typically use water and will provide both dust suppression and habitat values for the life of the program. The SSMP team proposes to develop designs and implementation for Phase B projects beginning in 2021. In situations where Phase B concept implementation has the potential to be delayed, Phase A waterless techniques such as surface roughening, creation of engineered roughness, and sand fencing may be used as a temporary measure.

The Dust Suppression Action Plan will serve as a “living document” that will be refined over time through continued community collaboration with local air pollution control districts, landowners, and other stakeholders. Future dust suppression activities will also be informed by monitoring and adaptive management of completed projects.