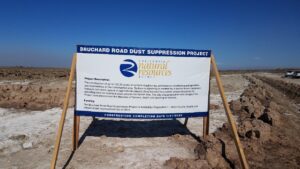 The project, which launched January 22 on the southern shore of the Salton Sea, included surface roughening of approximately 112 acres. The project used a ditch plow to create furrows on the surface of exposed playa along Bruchard Road. The furrows are perpendicular to the most common direction of the wind, leaving the ground surface resembling a ruffled potato chip. As wind sweeps over the ground, the furrows slow it down and significantly reduce the amount of dust released into the air.

The Bruchard Road project is the first of several projects the Salton Sea Management Program will undertake in the coming months to reduce dust on emissive areas around the Sea.

The project, funded by Proposition 1, was a joint effort of the California Natural Resources Agency, the Department of Fish and Wildlife, and the Department of Water Resources. DWR contracted with Imperial Irrigation District to conduct the work. IID and its contractors will continue to monitor the site to ensure it remains functional.

State agencies are continuing a series of community meetings to provide updates and engage residents in developing projects to reduce dust from exposed lakebed around the Salton Sea. Two community meetings were held in December in Mecca and Salton City.

The purpose of the meetings is to get community input on a draft Dust Suppression Action Plan that will identify and prioritize approximately 9,000 acres of dust suppression projects at locations around the Sea based on soil emissivity, prevailing wind patterns, and threat to populated areas. The draft plan will be available prior to the community meetings.

Here are the dates and times for the next three meetings. Spanish translation will be provided.

Materials for the next meeting will be available by mid-February on the California Natural Resources Agency’s Salton Sea webpage. 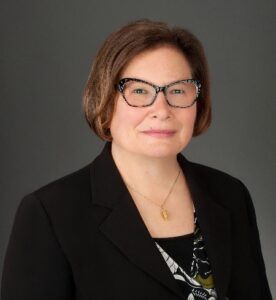 The California Department of Fish and Wildlife has selected Gail Sevrens as its new Salton Sea Program Manager. She will join the SSMP Team on Monday, February 10, and will be stationed at the CDFW Office in Bermuda Dunes. The post was previously held by Arturo Delgado, who is now assistant secretary for Salton Sea Policy at the California Natural Resources Agency.

For the past six years, Sevrens has served as an Environmental Program Manager for Habitat Conservation Planning in CDFW’s South Coast Region. In that role, she oversaw environmental reviews that seek to protect fish, wildlife, and native plants in the region. She also oversaw CDFW’s regional Natural Community Conservation Program, a broad-based ecosystem planning approach toward preserving biological diversity.

Prior to that, Sevrens served for 18 years with California State Parks, where her assignments included District Superintendent for Colorado Desert District, which included the Salton Sea State Recreation Area and other desert parks. She holds a master’s degree from the Graduate School of International Relations and Pacific Studies (now Global Policy and Strategy) at UC San Diego where she was a cofounder of the Journal of Environment and Development, and a bachelor’s degree with honors from UC Davis.

Know someone who would like to receive Salton Sea Community Updates? They can email their request to cnra-saltonsea@resources.ca.gov or visit http://resources.ca.gov/salton-sea/.