The California Natural Resources Agency has posted its 2020 Annual Report on the Salton Sea Management Program (SSMP). The report provides a summary of recent and planned activities by the SSMP to address air quality and ecological threats at the Sea.

The report notes that since the Natural Resources Agency’s last report to the State Water Resources Control Board in March 2019, the state team has significantly improved its capacity to deliver projects at the Sea.

It has developed a detailed time line for project implementation, with up to 3,800 acres of projects expected to be completed in 2020 on some of the most emissive lakebed around the Sea.

The State Water Board is expected to hold a public workshop on the status of the SSMP on March 18 in Imperial County. 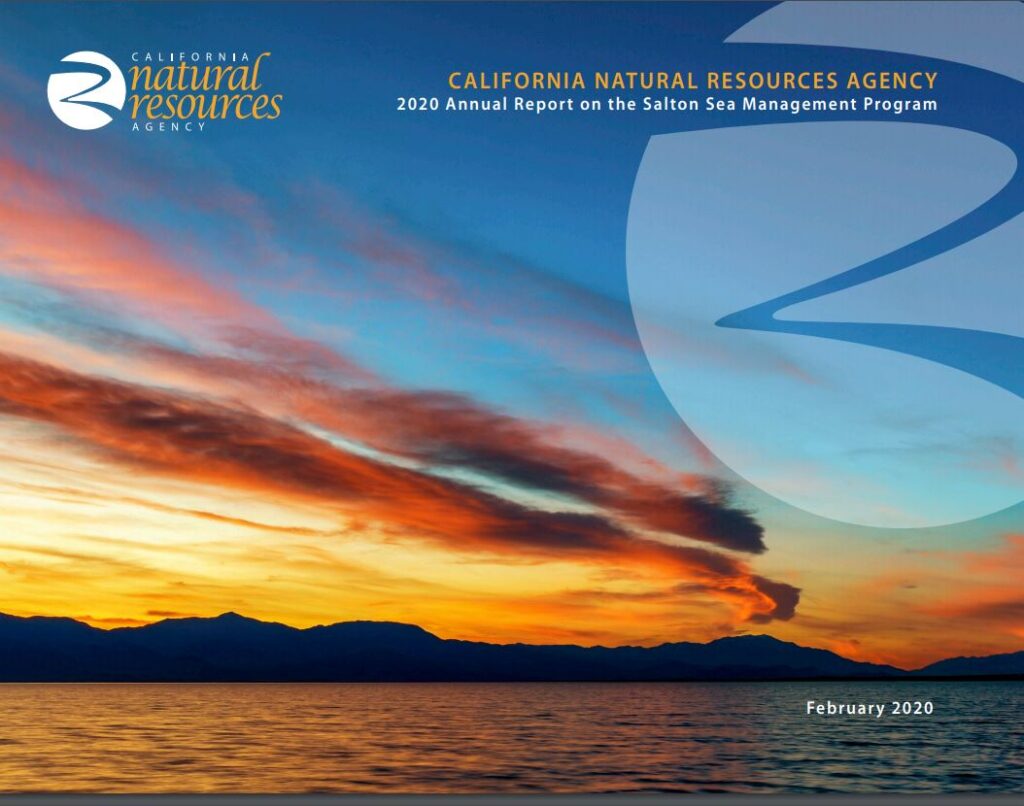 Draft Dust Suppression Action Plan Available for Review; Projects to Reduce Dust on up to 3,800 Acres of Emissive Lakebed This Year

The plan proposes to implement dust suppression projects in two phases. Phase A includes up to 3,800 acres of surface roughening projects for completion in 2020. The projects will help control dust from some of the most emissive lakebed sites and limit Sea-related impacts on air quality for communities such as Salton City, Bombay Beach and North Shore.

Phase B includes establishing vegetation on portions of Phase A project sites, where possible, and implementing approximately 4,400 acres of additional projects in areas that require further data collection, design and planning and have more extensive environmental permitting requirements. Phase B projects will be implemented as early as possible and a concerted effort will be made to complete identified projects by the end of 2022.

In addition to public meetings held in December 2019 to inform development of the Dust Suppression Action Plan, additional meetings are planned in late February and early March 2020 as noted below to gather additional community input prior to finalizing the plan.

Written comments on the draft plan will be accepted through March 27. Comments may be sent to cnra-saltonsea@resources.ca.gov. A final plan will be released by May and will serve as a “living document” that will be refined over time through monitoring and adaptative management, as well as continued engagement with the community.

In late 2017, the state released a call for innovative solutions to address the challenges associated with declining lake levels. Among those proposals received, 12 described various methods to import water to the Sea. On February 14, 2020, the state opened its Request for Proposals process, a step toward enlisting an independent review panel to evaluate the water importation proposals, and to explore other avenues of water importation. The independent panel of experts will review the importation proposals and consider technical feasibility, cost, environmental rules and permitting requirements, international agreements and other factors to evaluate whether the method of water importation has merit. Entities interested in becoming a third-party evaluator have until March 16 to submit their application to the state.

The findings from the independent review panel will be compiled into reports and presented to the state. The state could then determine whether a water importation plan is technically and economically feasible. At that time, the state would consider its next steps. This process was identified in the draft Water Resilience Portfolio released January 3 by the California Natural Resources Agency, California Environmental Protection Agency and Department of Food and Agriculture.

The Salton Sea Authority (SSA) Board of Directors has approved a memorandum of understanding between SSA and CNRA regarding Proposition 68 funding for the implementation of SSMP plans and projects at the Salton Sea.

The MOU outlines CNRA’s participation in SSA board meetings and describes other activities for coordination and collaboration regarding planning and implementation of SSMP projects. It is available on the SSA’s website.

Know someone who would like to receive Salton Sea Community Updates? They can email their request to cnra-saltonsea@resources.ca.gov or visit http://resources.ca.gov/salton-sea/.